Half a Million and Counting

On June 7, 2020, I ventured out of my house with camera in hand for the first time in weeks to document life on the street. The following photo of the Somerville Theater in Davis Square, Massachusetts, with its marquee message, “stay home and be safe,” became the impetus for a series on my Instagram feed, “The Pandemic Chronicles” (and the following month, the inspiration for The Pandemic Lens.)  I added “2020” to the Instagram series title after posting a few images, “just in case.”  The official death toll on that day in the United States was 109,000, a figure that the media called a “grim milestone.” 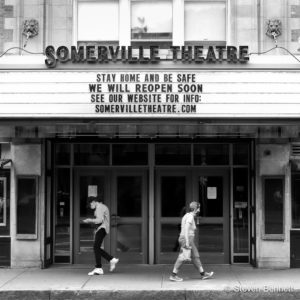 Jun 7, 2020. The inspiration for launching The Pandemic Lens. Maybe the theater will open soon.

I thought it would be fitting to reshoot my first pandemic photograph as a reminder that we still need to “stay home and be safe.” The theater will  hopefully open some day, but I doubt that it will be soon. And I hope there will never be a need for another February photo like this one. 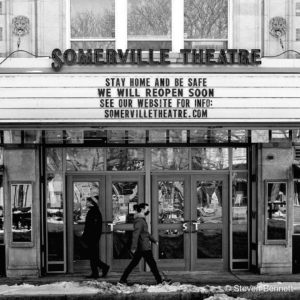